Recently, I have begun to envision it as a performance piece with a through line narrative. This is yet to be achieved. For now, the work is a major choral piece that should be performed a lot. I hope you will see its merits as well. 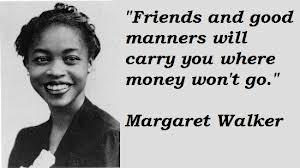 Jazz composition and what motivates composers is a source of endless fascination for me, as one who appreciates composition on the same scale as inventive improvisation. A recent communication with pianist-composer Randy Klein revealed his current composition project, inspired by the poetry of Margaret Walker. Believing firmly that music composition motivated by a significant achievement or body of work from another art form is always worth investigating, the Independent Ear sought out Randy Klein for some insights into this new project. It should be added here that Klein is also an enterprising musician with his own record imprint, Jazzheads – yet another point of interest, perhaps for further conversation down the road. Randy Klein: As far as a goal for For My People, it is for the work to become an actively performed work chosen by concert venues to be performed. Of course, I would want to hear it performed at the Kennedy Center or some other equally famous venue. It deserves to have a life. It is worthy.

Much of Randy Klein's music has received critical acclaim in the press.

Click on any of these works to read reviews in their entirety.